Shogun back in the game and first Festival of Sails entry 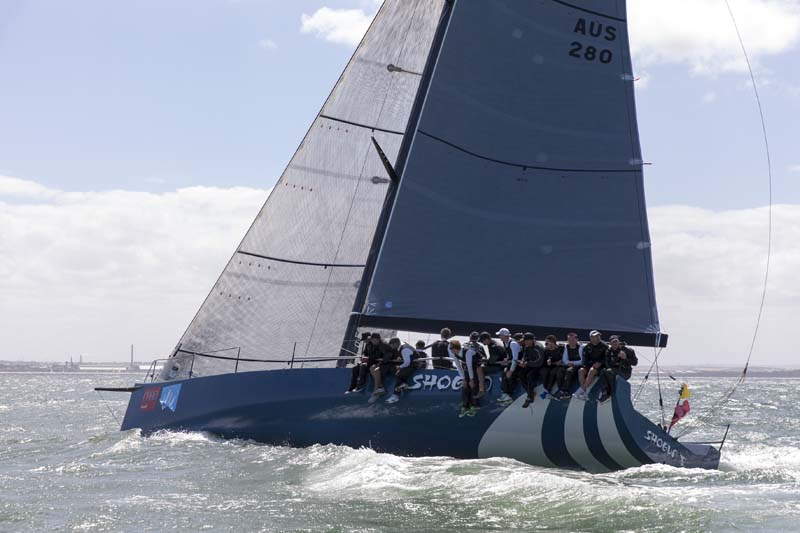 The overhauled TP52 Shogun is the first official entry for the 2015 Festival of Sails, owner Rob Hanna showing support for his yacht club and adding some grand prix weight to Victoria’s premier sailing regatta to be staged January 17-26.

Shogun disappeared off the radar last December after its mast came crashing down off Palm Beach during the final stage of the four-part Southern Cross Cup class series. The boat was already on the market and suddenly a much cheaper buy.

Hanna flirted with the idea of a super modern lightweight 40-footer, but after looking around at the options and crunching the numbers he came back to his beloved TP, deciding to invest the dollars in what he knows it offers; results and “F….U….N”.

“I had look at the grand prix 40-42 footers and took the research a fair way. Something high performance in that size range was getting up around $750K, and that’s not cheap sailing. I could have entered a lot more races and been in div 3, but I could still be done-over on handicap by an Adams 10 or Beneteau.

“I really love the TP52 and still have a lot of fun with it. It’s a good boat and we are going to be very competitive. I’m back in the game,” he warned.

The 2013 Audi IRC Australian class A Champion has been under the knife for a significant birthday makeover. It’s been stiffened for offshore racing, and importantly for deliveries. Trucking a 52-footer is an expensive exercise and every time the boat is pulled apart for hauling there has to be a meticulous reassembly.

Hanna believes his rig came down during a tack in 20 knots on a short choppy sea when the D1 shroud gave way at the deck level, which put too much strain on the rig and caused the failure. “We assume the D1 wasn’t tightened up enough. It’s speculation but the most practical answer.”

Hanna replaced the previous Med Cup style rig with a taller and stronger carbon mast designed to help the helmsman in the lower wind ranges, new carbon forestay and boom that allows a reef,. This opens the door for Shogun to enter Cat 2 short and medium coastal passage races.

The topsides have been redone and the whole boat repainted. Every system has been pulled apart and reconditioned or replaced, as has every winch and rope.

The upgrades were managed by Paul ‘Monty’ Montague and the boat re-launched in late June. Hanna is planning to run with a crew of 12 rather than 15 for most events. The Sydney fleet contesting the CYCA’s Flinders Islet Race in late September will be the first to see Shogun unveiled.

On being the number one Festival of Sails entry Hanna said, “I enjoy the Geelong regatta for sentimental reasons and I wanted to support the event by getting my entry in early.  I’d like to see it continue as the largest regatta in Victoria.”

An extended 2015 Festival of Sails regatta begins when the multihulls start rolling in from around the country to compete in their annual Australian Multihull Championships from Saturday 17th January. The diverse mix of racing and cruising catamarans and trimarans will compete on a mix of courses around Corio Bay and Port Phillip, until Friday 23rd January. As the multis complete a reverse passage race up to Melbourne, on Thursday 22nd January, the exciting Sportsboats will hit the water, to take advantage of the great conditions that are synonymous with fast yacht racing on Corio Bay.

For more than 300 entries, the iconic 34Nm Melbourne to Geelong Passage Race, on Friday 23rd January, signals the start of a great weekend of racing and Australia Day long weekend celebrations, to be held in Geelong.

Notice of Race available at: http://festivalofsails.com.au/sailing-regatta/race-documents