International 14 World Championships 2015: Not just for the boys, a female class leader coming to Geelong 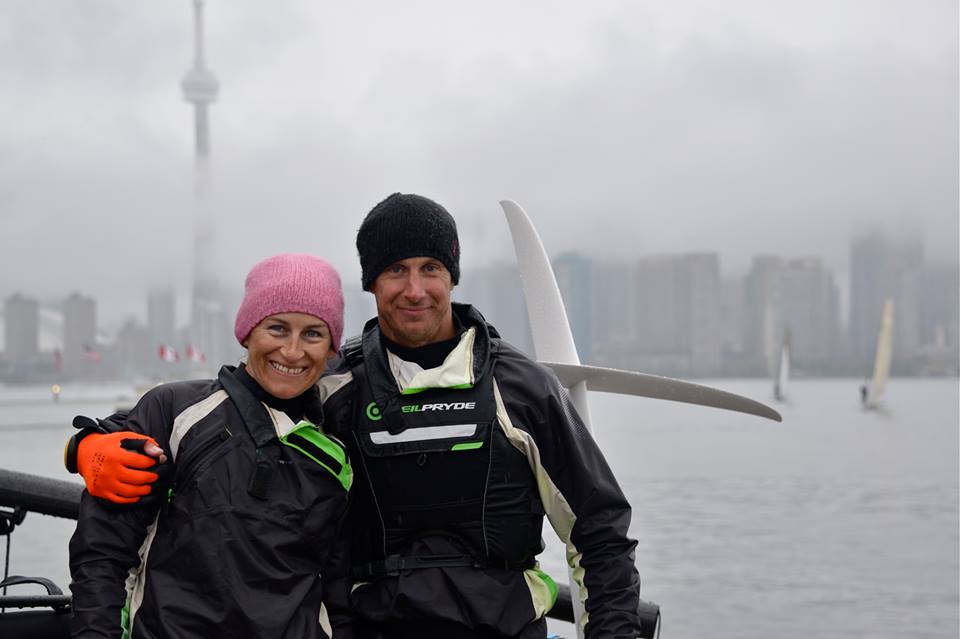 English skipper Katie Nurton has just joined the growing number of registrations for the 36th International 14 World Championship to be held at the Royal Geelong Yacht Club in Australia from 3rd to 17th January 2015.

Nurton is a member of both the strong overseas contingent to contest the event being conducted by Royal Geelong Yacht Club on Corio Bay in Geelong, and the growing group of women who sail these progressive boats.

“My first Worlds was at Beer in 2000 in a borrowed boat. I can’t remember where we came, but it was a disaster.  Then I bought my own boat and teamed up with the legendary Nigel Ash, who was recommended by his brother. He had done lots of windsurfing, but no sailing, and I couldn’t even trapeze. So it was a slow start. We finished 52nd at the New Zealand Worlds in 2005 and have gradually improved since then.

“Getting a new boat in 2006 was a big step forward. Before the Weymouth worlds, I quit my 90-hour-a-week banking job and started working more normal hours. Not being exhausted at the weekends and spending a bit more time on sailing and boat maintenance has made a big difference. We finished third at the Weymouth worlds in 2011 and sixth in Canada last year,” Nurton said.

The 40-year-old Nurton has been on the water since she was six-years-old. Her parents had a cruising boat and encouraged Nurton and her brother to take up dinghy sailing.

“My brother and I got an International Cadet when I was 12 and he was 10.  We were both at boarding school and only sailed in the school holidays, so we always came last.  Then when I was 17 my school bought a 420. Imagine being at a girls boarding school and never allowed out. Suddenly, a friend and I were allowed to go to 420 Youth Squad winter training weekends at miserable reservoirs where there were pubs and boys. I suppose that’s when I got really keen on sailing.”

From dinghies Nurton progressed to the 470 class and the pursuit of qualification for the Olympic Games. She was unsuccessful and disappointed. Her then house-mates convinced her to take up I14 sailing for a bit of excitement.

As the skipper in her dinghy days sailing with her brother, Nurton decided early on that crewing was for someone else. “I am completely useless crew. I was the big sister, so even when I was young I never crewed and now it’s far too late to learn.  We had Crew’s race earlier this year at Itchenor. Incredibly, we were leading on the first leg, but it was all over when I tried to get the spinnaker up,” Nurton quipped. She will race in 2015 World Championships with long-time crew, Nigel Ash.

Her success in the I14 class has come about through not only her talent, but also through her fitness and her passion for the class. Nurton believes the class is physically demanding for the women as well as for the men.  “It’s a lot easier now, but you still need to be generally fit and conquer your nerves.

“The people who really deserve the respect are the female crews. There are quite a few of them and they are very hard core. I don’t know how they do it.  I think the boat maintenance puts some women off, but I secretly, or maybe not so secretly, like that part.

“Now that girls are sailing 49er FXs, I imagine we’ll start to see more of them in 14s,”Nurton added.

Her passion for the I14s comes from being involved in a class where there has been a long history of high performance and the challenge of being a part of a development class. And there is also the people who stay with the class for a long time. “I’ve made lots of really great friends, from all over the world, and the competition is always tough, but friendly.”

Standard Entries for the 2015 World Championships close on 14th November 2014. Late entries may be accepted after this time with a late entry administration fee of $AUD100 applying, until the close of entries on 12th December 2014.